Still reeling from the most gorgeous holiday we had in Berlin last month, I thought I would do a little write up of all the places and ‘attractions’ we visited (in-between all of the eating and drinking we did). So here is your rough guide to the places we went, a little bit about them, and some tips about the best times to visit or if you need to book. The best part about all of these places is that most of them were totally free and within relative walking distance of each other, I can’t recommend you visit this city enough.

Brandenburg Gate
Located in the district of Mitte, the Brandenburg Gate is a hugely impressive 18th century monument which has become the site of major historical events throughout its existence. As you will find with many of Berlin’s much loved tourist spots, it’s totally free and is located within walking distance of the Reichstag and the Memorial to the Murdered Jews, so if you plan your trip right, you can do all three in a morning/ afternoon. There are bits of information dotted around the gate, but if you are really keen to learn more about its history, there are plenty of tour-guides walking around the gate offering free tours in many different languages, so hop on one if you have the time. 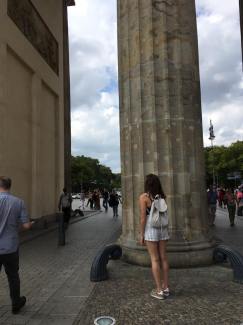 Reichstag Building
The meeting place for German parliament, this impressive building has a lot of history, and now boasts an impressive glass dome which offers a 360-degree view of the surrounding cityscape. Great news for students and those trying to travel on the cheap, it is totally free to go and visit. But a word of warning, to visit requires prior registration on their website and I would really recommend booking a slot way in advance. We tried booking on a couple of days before and there seemed to be little-to-no slots available. After reading online that it is possible to sneak onto some slots on the day, we took a chance and arrived in the morning, but were sent over to a huge queue of people who had obviously thought the same. In the end we gave up on the idea of waiting and so only saw the outside, however I know it is definitely worth the visit and worth the effort of registering a few weeks prior.
You can register to visit and book a time slot here – just make sure you read all the terms about what you need to bring on the day

Memorial to the Murdered Jews of Europe
The 200,000 square ft site is covered with 2,711 concrete ‘stelae’ at different heights across the sloping ground. Just around the corner from the Brandenburg Gate this was by far the best thing we saw on the trip. The uneven blocks are supposed to create an atmosphere of confusion and unease. The memorial is completely free to get lost in for a while, and whilst at first I couldn’t think of how a load of blocks could be that interesting or impressive, once walking around you really get a sense and a feeling quite unlike anything else. It’s hard to describe, but it is a really effective memorial and can’t recommend you visit it enough.

Topographies of Terror
Based on the site of buildings used as the SS Reich Main Security Office, and the headquarters of the Gestapo, Topographies of Terror is an outdoor exhibition and indoor museum, which also runs alongside an old part of the Berlin Wall. The permanent exhibitions tell you all about the institutions of the Gestapo, SS and Reich Security Main Office and the crimes they organised. Documents and photographs display how the Nazis rose to power and evocative personal accounts of those involved. It’s a really interesting exhibition, and once again totally free – but it is quite lengthy and requires a lot of reading, so I’d recommend visiting when you’re fresh and ready in the morning rather than when you’re a bit tired from all the exploring later on.

Check Point Charlie
The best-known Berlin Wall crossing point between East and West Germany, Checkpoint Charlie pulls thousands of tourists every year, which is exactly why I wouldn’t recommend you put this stop as a priority on your list. As many of the guidebooks say, Checkpoint Charlie is now a total tourist trap and so the best advice I could give you is to walk past in en route to other attractions. It is swamped by so many people you can barely see the checkpoint, surrounded by built up modern buildings such as a huge McDonalds right behind it, and a pricey cheap looking ‘museum’ across the road made us sure we didn’t want to hang around. A quick rubbish picture and we made our way elsewhere, you’re probably much better off reading up about it than wasting much time here.

East Side Gallery
One of the most famous galleries in Berlin, open-air, and totally free, is the 1316m long East Side Gallery. Murals painted directly on the remnants of the Berlin Wall by artists from all over the world pulls millions of tourists every year and it’s easy to see why. The paintings document the feelings of many after the Wall was finally brought down, expressing hope for the future. They’re super impressive, but I’d recommend you go later in the evening or super early in the morning to have a better chance of taking some uninterrupted pictures.

Jewish Museum
The largest Jewish Museum in Europe, the Jewish Museum was one of the first places people told me to go and visit when I told them I was taking a trip to Berlin. If anything, the building itself is beautifully designed and visually stunning. You first make your way through the ‘Axes’ exhibition, divided into three different areas to symbolize three paths of Jewish life in Germany. The most impressive features of the building have to be the Garden of Exile and the Fallen Leaves installation, both extremely powerful and well thought-out. Our only disappointment was that the real pull of the museum, the reason we were told to visit, was the permanent exhibition, which happened to be closed for reconstruction and won’t open again until 2019. Whilst the museum was impressive, I feel we definitely missed the main attraction. That being said, if you’re visiting on a sunny day, the gardens and courtyard at the back of the building are a lovely spot to grab some lunch and bask in the sun as you mull over what you have just walked around.
It’s only €8 for a standard ticket or if you’re a lucky student, then you can get in for a mere €3

TV Tower
Situated in Alexanderplatz, the TV Tower standing at 368m is the tallest structure in Germany. It serves as a home to several radio and TV stations, but its main pull for tourists is its floor at 203m, offering a view across the whole of Berlin. Take a trip up here to admire the breath-taking views whilst sipping on a beer or a cocktail from their rotating sky-bar and restaurant. Best advice I can give you is to book a visit to the tower in advance. In a bid to save money, we found out that getting tickets on the day are cheaper, and we could also apply a student discount. However, after arriving and seeing the queue to even get to the ticket office was over and hour and we had a flight to catch, we decided to settle for having a wander around outside. For the sake of spending an extra €7 we could have arrived, skipped the queue, and been up there enjoying a pint without any hassle, so bare it in mind when planning.
Fast track tickets are €19.50, or its €15.50 on the day, with an offer of 20% student discount, all prices can be found here

Markthalle Neun
As already mentioned in my previous post about budget food in Berlin, if you find yourself in Berlin on a Thursday night, head over to Markthalle Neun in the heart of Kreuzberg for their famous food market. In a beautiful hall covered in fairy lights and a buzz of people, the market is filled with a huge variety of food and drink stalls, where your only problem will be deciding between them all. There is something for everyone, where the vegan, vegetarian and meat-filled options are endless. One minute you may find yourself tucking into some tasty tapas, the next a decadent cheesecake, or tempting tacos and sugar soaked churros. We opted for some octopus dumplings, a fresh calzone and a naan wrap filled with marinated cheese and pork. Wash this all down with a large glass, (or bottle), of wine from one of the many bars and soak up the atmosphere.